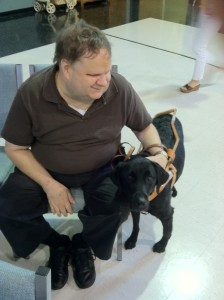 When Gerald Ford was President, he said “I know I’m not a Washington or a Lincoln.”

I discovered baseball at age 8, in 1971. Once my grandfather realized I was listening to games on the radio, he did all he could to teach me about the game’s past and its great players.

I never thought of broadcasting baseball until I got into high school, and heard college announcers Michael Kay and Charlie Slowes, (both on the Fordham radio station WFUV) and present New Jersey Devils’ broadcaster Matt Loughlin on WSOU, the station at Seton Hall.

From then on I was determined to find a sighted broadcast partner at college and announce college games. I did this with Jim Lucas, who would later be my professional partner for my entire career.

We broadcast games in the Florida State League, Eastern League, Northern League and South Atlantic League, where our final stop was the Charleston, S.C. RiverDogs.

Since leaving baseball following the 2002 season, I have remained a fan and watched as the game  changed.

As  1971 began, the words “Closer,” “Sabermetrics,” and “night World Series game” were nonsense words, as were WiFi, Instagram, and (gasp) Justin Bieber!

I’ve followed baseball through two major strikes, the steroid era and beyond into what appears to be the new Era of the Pitcher.

As this season heads for the playoffs and World Series, I’ll bring you my somewhat tilted views on the best games of the day, plus other features.

I hope you enjoy baseball-as-I-see-it.